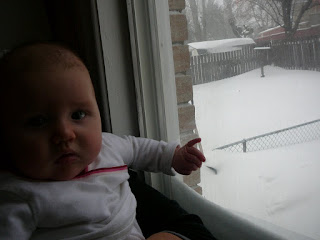 With so much snow these days, William and Rosie and I are pretty much kept indoors. Especially now that I'm on the brink of a cold, yuk. Our time indoors is not wasted however. In the past week, Rosie has rolled over from her back to tummy twice, hooray! She is amazingly quick at grabbing anything offered to her, and she has started a new sleep schedule. She is now down to five feeds and 3 naps a day (8:30-10:30, 12-2, and a power nap at 4-5), she is down for the night at 8 until 7am! She really laughs too when you blow raspberries on her tummy or quickly kiss her chin over and over, so funny! My only worry with Rosie is that she isn't nursing well on the left side. Teething maybe? I'm going to try a bottle with her this week I think of expressed milk and see how that goes, its hard! I'm also planning on starting a little bit of rice cereal when she turns 5 months like I did with William, I think she'd love it. But on the other hand I don't want to rush anything, just take things more slowly this time and enjoy. It's already going too fast!

William and I have had some really good talks. He confided in me that he wants to be a butterfly when he grows up. Why? Because they 'fly and have better wings than birds' - of course!
William loves to pour his own drinks, and is usually successful at it. He's getting much better at playing on his own and making cinnamon shakers out of three blocks of brown lego :)
AND he is completely toilet trained (not at nighttime)!! Hooray!!! It was sooooooooo hard and at times seemed impossible but I never even have to think about it anymore. He's got it all under control. Even when we were out once at Shoppers he very calmly said, 'I have to pee, you think these guys have a potty?' So off we went and found the staff washroom and William did his business, yah William.
And another great thing is today I started to read William his first chapter book, "A Mouse and a Motorcycle" by Beverly Cleary. I wasn't sure if he'd last through much of it but this afternoon, 70 pages into it (oner hour later with very minimal pictures) he was still begging for more and tells me all the details). Very fun. Scott can't wait and thinks maybe a little Terry Pratchett is next.
So good :)
OK, Scott's at class, and I'm sick so off I'll go to bed with by latest Thursday Next book, yeah!