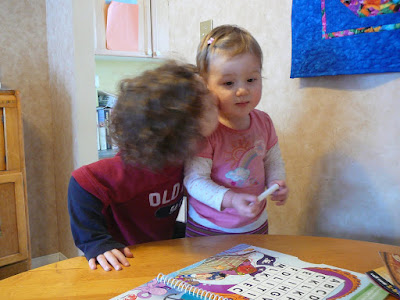 So here William looks so sweet and loving, while kissing Rosie. And he is...most of the time :)
But today, perhaps he was tired, perhaps he had a case of inaugural nerves, or perhaps it is simply just too much dinosaurs!! Whatever is was, William has taken to growling at me when I say something he doesn't like.

And so on. It happened many more times throughout the day. I was so used to it by the end of the day that I wasn't sure why Scott looked so shocked when he heard his son growling at me throughout dinner. Maybe William was just sick of my dinosaur jokes that the new name for Brachiosaurus is BarackObamaosaurus. But I really can't say why that would irritate anyone?