Here you can see a typical flight. Up into the wind, twisting in the air, and dropping somewhere nearby. So long as "nearby" equals "on the roof", "in the neighbour's pool", "on the garage roof", "in the driveway", and so on. 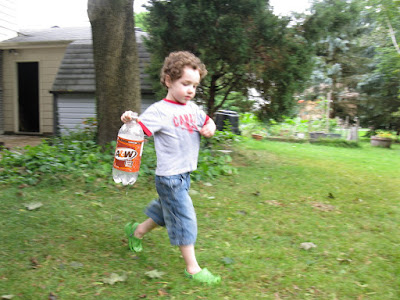 Flight Lieutenant William was ever ready with the water. We christened the above bottle "Flaming Orange". It was selected for flight operations when the clear bottle without a label (or a name) proved difficult to see in the overcast skies. Until the tell-tale "bonk" signaled its return to earth.

The above video captures another typical flight pattern. Listen carefully for "Oh shoot" as the Flight Officer Sarah detected the bottle dropping into the flower bed. Flight Lieutenant William managed a safe retrieval. 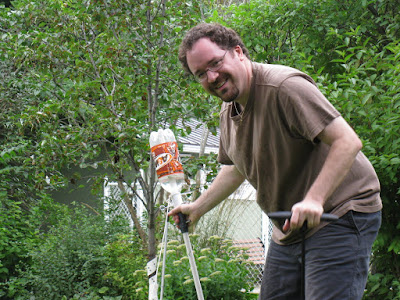 Flight Captain "Daddy" Scott in a "rare" moment of glee before flight operations. This may have been the unexpected "oops" launch, although records from that period were mysteriously damp and illegible.

Apparently, the flight tests were disturbing the local wildlife. Or maybe the blueberry pancakes.

Later flights in the day were canceled due to high winds. Tomorrow we will be testing a new, experimental launch control device that we hope will be more reliable. Unfortunately Flight Captain Scott was drenched in a lights out late night test which just concluded. Unfortunately, "Flaming Orange" met its demise in the course of action.