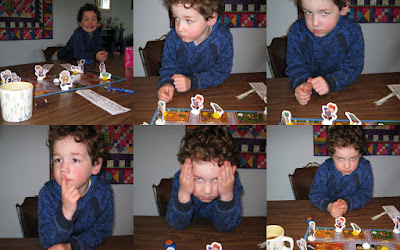 The days have been dark and wet and we have colds. So afternoons this week have been spent inside while Rosie naps. William and I have taken to playing games, making cookies and drinking tea, he still loves his peppermint. Yesterday, after playing Clue about twenty times, William started discussing the facial expressions on the characters and how they are looking around to see if anyone was watching them. I told him that meant they were suspicious or guilty, which he knew, and so we took to making the most suspicious faces we could for the camera. I remember not so long ago when William would run from the sight of a camera let alone pose for one like he loves doing now. I'm hoping it lasts another few weeks, should get some fun pictures of a smiley birthday boy.

Today Scott and I were discussing something money related, and after turning away I jokingly told Rosie that she needed to learn now that as a woman, most of the time, she would be right. As I said, this was a joke. Rosie looked up at me from her play-do and squinted. "I a woman?" I told her yes, like Mommy, she was. She said, "No. I a baby rabbit," and immediately went back to using her tiny hands to roll little bits of play-do into balls and let them fall onto to floor. Serves me right for trying to be funny.