Camping with the Neufelds has quickly become a favourite beginning of summer treat, come rain or shine, and rain it did! But the kids never noticed, they slept some, ate some, begged for the beach, hiked through caves and mini-golfed in puddles. We went home Sunday morning loading up soaked camping gear and leaking tents wearing not much but damp pjs. We were wishing to see just a little of the sun but this year it wasn't meant to be. Still we wouldn't have missed it and the kids are already asking when we're going back. Bring it on Neufelds! (just give us some time to buy a new tent!!!) 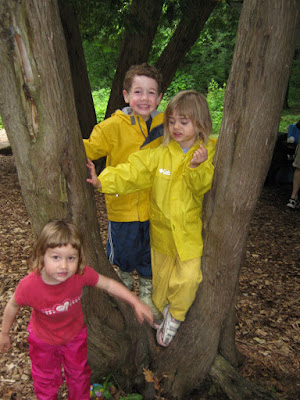 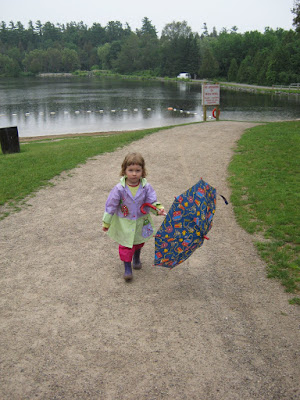 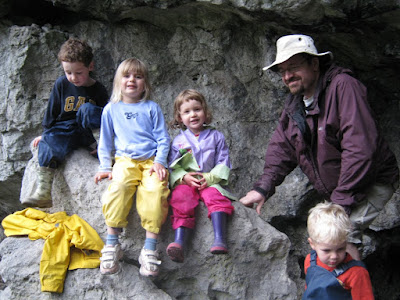 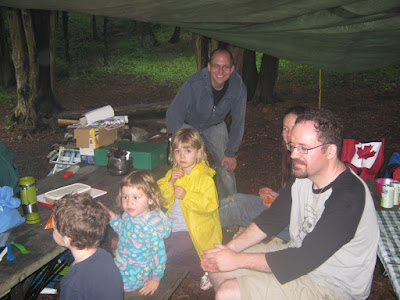 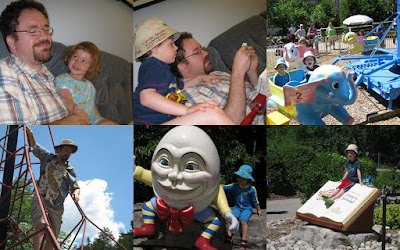 We love you Scott! Whether we say it on the day or everyday before and after! We had a great time for Father's Day this year, spending the day with family in London which meant lots of food, lots of soccer watching and lots of Story Book fun! Thanks for the great treat Oma and Gramps!

I haven't been blogging, or even writing much these days. Days are going quickly, end of school year wrapping up, plans settling suddenly for the upcoming summer months. The forecast for our holidays looks great, but the days themselves have been filled with a sick five year old, a dad with laryngitis that seems to have no end in sight and a mom that feels like she's dragging her feet just a tad. We did manage to sidestep these minor grievances for some fun this week that I want to spend some time thinking about and being thankful for. William's first true day of playing hookey was spent strawberry picking with friends, the evidence all over Rosie. We've been playing in the garden, talking away to our sprouts to reach up and grow taller. We bought a new pool and played in it happily, at least the kids did while Mommy tried to read a few pages of yet another book. And we went on a secret mission trip to the mall, which led to lunch in the Zeller's restaurant (grilled cheese and french fries with gravy!) and a new bottle or two of nail polish, again, the evidence is all over Rosie (although William also has his two big toes painted tonight). The secret mission part was needless to say for Daddy this weekend, we'll let you in on the secret soon enough and hopefully the star of the day himself, will be talking.
<>< 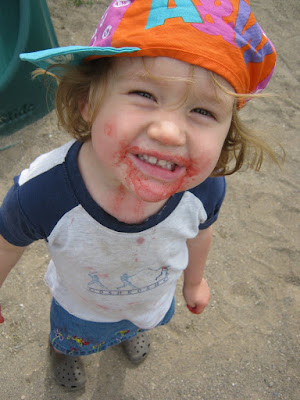 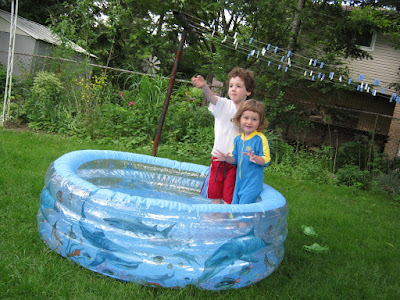 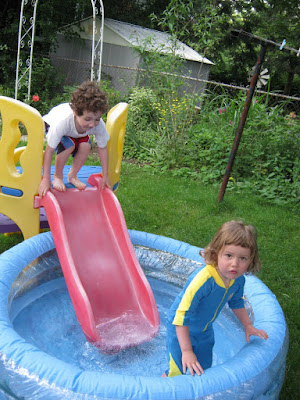 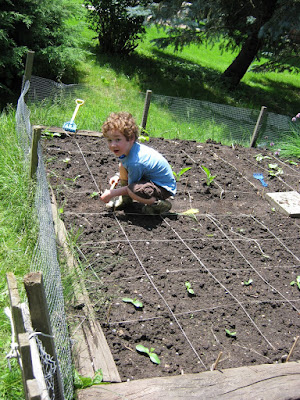 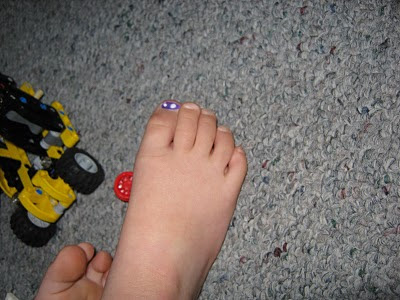 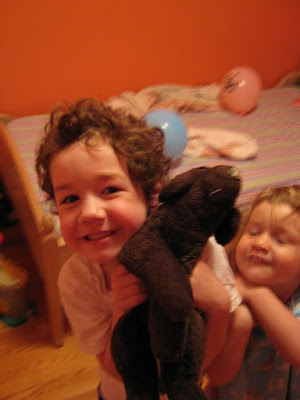 So it happened. William turned 5, and had the best day ever doing so! The morning started with loads of smiles for the camera and special poses with his best dog Bingo who turned 4 on the birthday day, as he was William's first ever birthday present from Mommy and Daddy. 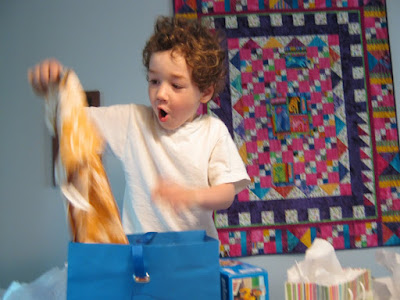 William says he got everything he asked for. Which whether or not is a good thing, we'll leave for further discussion down the road. Regardless, who wouldn't do anything possible to get a smile like the one above on that kid's face (even if it was just a funny Hawaiian print shirt he was opening). 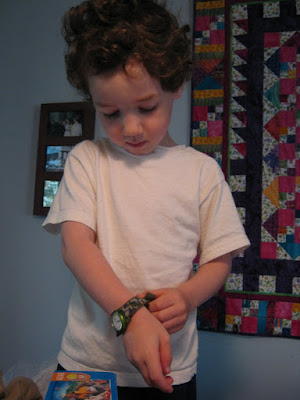 William's special present for turning 5 was his first watch. His birthday was a week ago and besides sleeping and bathing, he's yet to take it off. Scott and I were talking to his JK teacher last week and she told us she loves the watch and how William is now able to remind her of every scheduled task, be it gym or snack time or home time, and how often he tells her she is late. 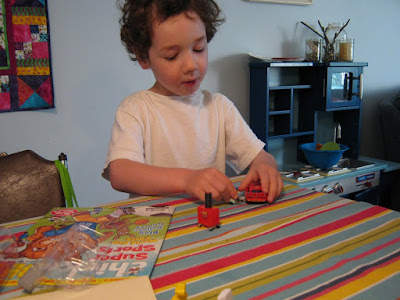 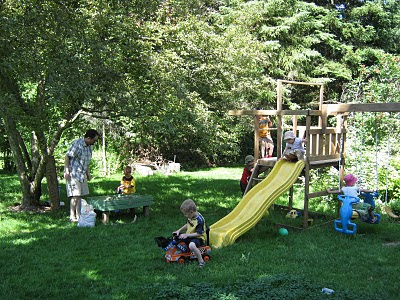 After presents, it was time to get dressed and welcome friends for a birthday party. No parents this time, just the kids! The time flew by with outside play... 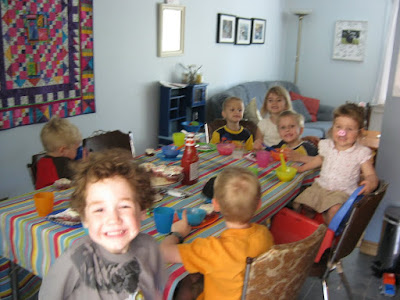 ...and William's choice of homemade macaroni and cupcakes! The animal noses you may or may not see were our attempt at a game, but birthday excitement brought on by friends, sugar and presents kept us from getting much of anyone's attention. 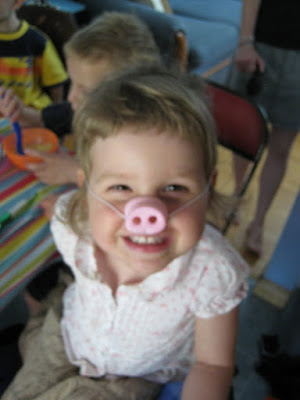 Except for Rosie, who loved the piggy nose! 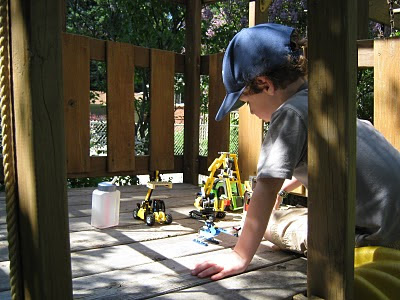 After the party, family and more friends came over, but it got to be time for William to have some quiet time. The king on top of his castle, surrounded by new toys. 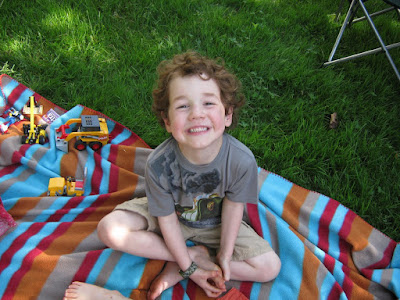 A little calmer but still just as happy. The day went so amazingly well, we had highs but no crashes! 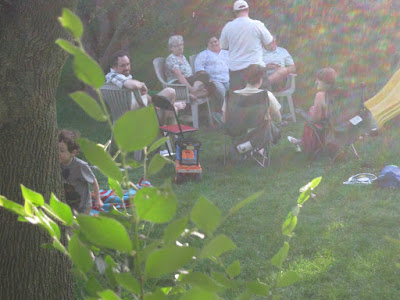 The day went on well after bedtime. There's not much to say at this point, it was truly a perfect day! 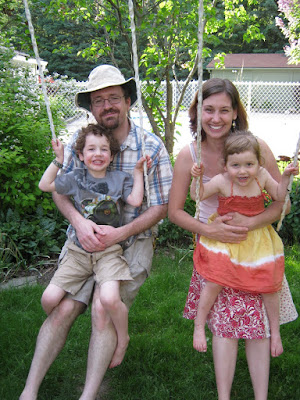 We're a happy bunch. Who knew 5 years would go by so fast? Happy Birthday, one more time if I can sneak it in, my love! William's guilty pleasure of the day was his very first pack of gum that one of his friends had put into his present. Yup, a very happy boy.