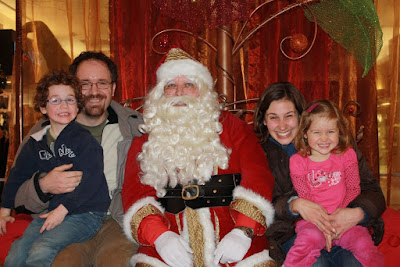 Ever since William's second visit to Santa was a complete disaster, we've never considered going back. But this year they both edged closer to the peripherals of Santa's mall kingdom and asked to go for a visit. Tonight (hating to admit we were at the mall having fun on a school night running last minute errands and eating in food courts) there was no line up and we did it! Of course once we were at the final gate and Santa's Helper (as the kids called him) beckoned them (all be it somewhat creepily) over, they clung to us like mad monkeys until they were turned around to face the camera while sitting in our laps. The trick this year, besides Rosie love of any camera and picture taken of her, was William's missing tooth. That little gap wanted to be seen and for some reason William thought it was important enough to face his fears of the great mall elves and smile once again, beside the man in the big red suit.