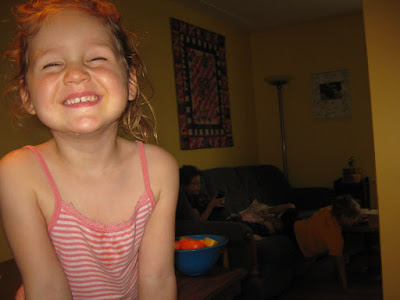 I'm intrigued by today's title but tonight's not going to be the night I mull over it. Tomorrow maybe.

A few tidbits of fun just to make myself type a little more.

William's getting his 6 year molars and from how excited he is about them they may as well be made out of gold.

Rosie's gang of imaginary friends is increasing at an alarming rate, friends of friends of friends. The girl's in need some schooling but I love her imagination. Both kids are doing a week of day camp the first week of July. I thought that staying in the routine of getting up and going would make it easier on them. William's doing the ESQ engineering camp at UW, so he'll be going off to work with Daddy each day, five full days, his longest time away as he's used to half mornings. Rosie, the same week, will be doing a morning day camp, with friends, organized by the city. She'll love it, some actual real people to put with some names. It'll only be two hours a day on my own for the week but it'll be writing time and I'm looking very forward to it. I'd be dishonest though if I didn't say that I'm nervous for William, but there's Lego and he knows it and it should be good. The process for things for us for the next while is going to balance a lot upon change.