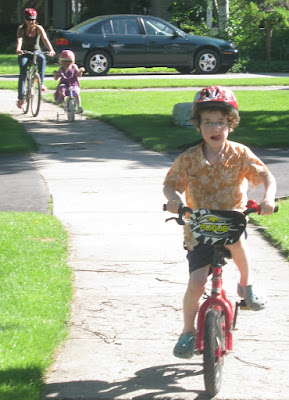 Satisfied along a sigh of relief that it's finally Friday and finally the end of swimming. One kid passed, one didn't, but no one's disappointed or surprised. It was a hard swimming term, too many sick weeks and Swim Kids 3 gave William his first real challenges in the water, probably a good thing. But the best feat of all was getting William back on his bike, after an entire season of being too frightened, he just sort of got over it and jumped back on, but not without considerable contemplation, as you can see by the tongue.

Home care with D for the week is done, Bailey's pick up was relatively painless (everyone but me stayed in the car, it was a short list, I didn't plan well enough), and now kids are just finishing looking at books on their own in bed before lights out. Last night of swimming meant a french fries and wraps pick-up for dinner from Johnny Fresco's, perfect treat which also leaves very few dishes to do now. Nothing else for tonight except a quick tidy up, maybe half an hour spent on some rewriting, a movie with Scott and a bag for Toronto tomorrow to pack!! I know I won't be able to get to a computer tomorrow, so I'll make up for it somehow on Sunday.