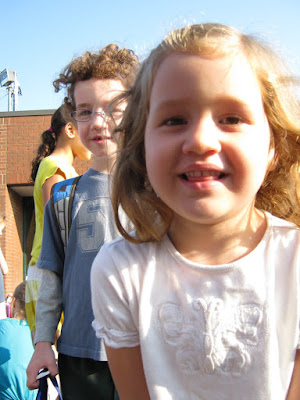 Monday morning was Rosie's first day of school. Full day, all day she was away from home. The results were smiles and squeals, stories of Joseph who wouldn't stop following her around, Jacob who asked all day if he could hold her hand, yogurt everywhere in her lunch bag (being the one and only food she attempted to eat), and that William and she chased each other around the play structure for a little while during one of their recesses. The rest of her stories weren't so believable, like the giant cow (real cow) that lives in the classroom, the one with a pink bottom. Hmm.

Yesterday was spent at home with me, getting groceries, baking galore and playing school while Rosie called me by her teacher's name, all day.

Today. Door of school opens and her teacher walks out to squeals and jumps from Rosie possibly equivalent to those heard by groupies gathered this week at TIFF. Joseph stopped chasing her today and was happy to play together in the sandbox. She didn't have enough time to eat again today because she was talking so much to Claire. I told her, how about you eat more and talk less? To which Rosie answered, that's what the teacher said. Hmm. At least there was no spilled yogurt. Oh, and she learned to do the macarena while singing the months of the year. I kid you not.

William told me that at recess, he and Rosie have been introducing each other to their news friends, I love that. William says all the grade one boys run around playing 'bad guys' while chasing each other and pushing and grabbing. He says he runs alongside telling them maybe not to play that game. Hmm.

All I know is that after more than a week of really rushed, dare I even say crappy mornings, I woke up this morning to William going on about how much he loved school and couldn't wait to get back. He loves the French (bad English go away, only French! he says), it's as if an entirely new world has opened up to him. On the way home in the car yesterday (the only negative so far, not being able to walk) William was telling me he has deux garcons and une fille for his amis, not bad huh? He was so excited to have 'a sentence' that went back and forth between us. So glad we made the switch to French school, so worth it.

My two days alone have consisted of writing almost two thousand words. I love the first 250, plan on scrapping the rest and restarting. Feeling a little down about that tonight, seeing how out of practice and rusty I seem to be. It's so hard to love something I've written one day, only to hate it the next. Not to mention how weird it feels to eat lunches alone with only a book. Not that I'm complaining about that. It's still only week two, I always give myself until Thanksgiving for things to feel really comfortable and underway. Just glad the kids are happy, Scott's classes are starting somewhat smoothly for him, and I'm getting something done and enjoying a bit of quiet. 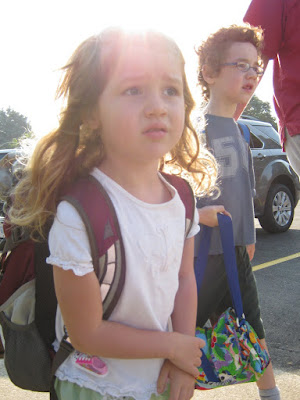 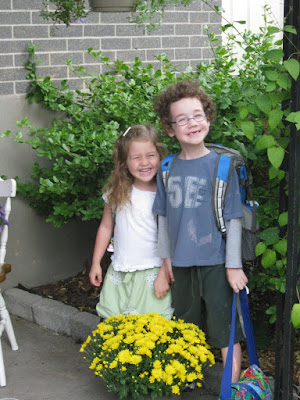 Sounds like the kids are loving their new school routine. I love that they're introducing friends to each other - so very sweet!!!