Just to let you know, as gently as I can, the reason for the absence of Christmas blogs. I've been saying too often lately, how lucky we've been. No one has been sick in our house since school started. Amazing! Of course Sunday night, after a wonderfully Christmas weekend with my family in Whitby, Rosie was up sick.

Which meant no school for Rosie on Monday, which meant bye-bye to the last full day I had on my own, with both kids in school to get things done. That was alright, I had a cold of my own and didn't really mind an excuse to be cuddly with my girl.

Watching Christmas videos together on the laptop, Rosie was sick again.

All over the laptop. All over.

The computer died immediately, after doing overly-exaggerated beeps and flashes. That is the computer that is mine, with all of our pictures. I've been sneaking time at Scott's when its around.

So please imagine my kiddos with their cousins, opening beautifully knit sweaters by Nana on the weekend.

Picture us making gingerbread trains at the kitchen table, with goodies and a Advent candle on the table that has gotten quite small.

Envision Rosie under a knit blanket and having a nap on the couch to fight off her bug.

And best of all, and coming as soon as I can do it, somehow, see the kids singing their hearts out at yesterdays concert.

And while my laptop remains ill and somewhat smelly (ew!) we are all healthy and happy and no longer waiting for the next one to get it. (I just jinxed us didn't I?!?)
Posted by Sarah at 9:58 AM No comments: 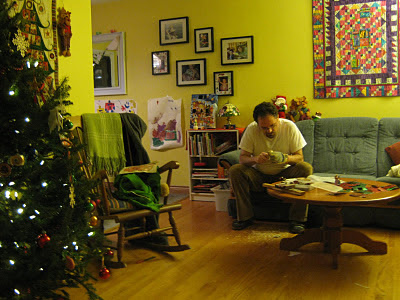 Scott working on some ornaments last night after the kids stayed up late decorating the tree with us. 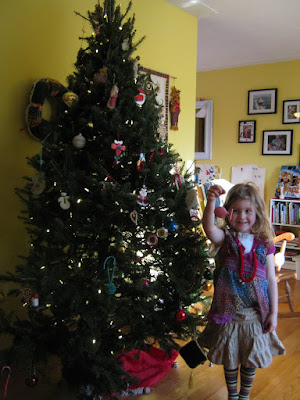 And Rosie this morning evaluating her work. 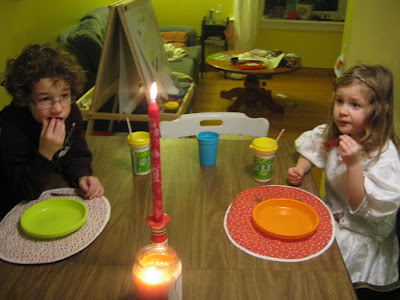 The first night the candle took longer to burn down to the 2. Since then, they've had to eat a little faster.

Wow, I don't remember thinking they looked that tired!!