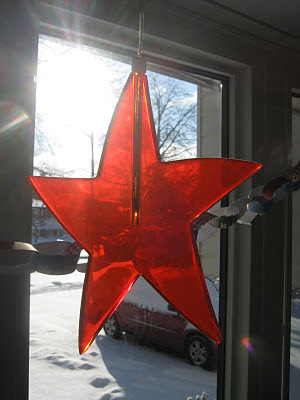 Today feels like the last day of the holidays, even though the kids are still home for a week. Scott worked from home today, which still meant it was me and kids fending for ourselves for the first time since before Christmas. It was great, the kids played together, I cleaned my office, we played outside, shoveled the driveway, decorated paper for a gift Rosie needs to wrap for a friend's birthday tomorrow, played some Wii. It was good.

Until that witching hour. The time when it's just a bit too early to start making dinner and I'm getting itchy for Scott to come home, or as in today's case, surface from his office in the basement. At this time, for some reason unknown to me, the kids went berserk. It was as if all the energy from the past ten days or more erupted from their skinny bodies, out through the tops of the their insanely curly and messy heads, and exploded all over the still Christmas-decorated living room. We were sitting on the floor the minute it happened, playing a board game. They were shrieking like mandrakes, throwing the dice around, talking to each other using some pattern of sounds I hope never to understand. I left them to it and escaped to my office - clean office - to try to read a short story I'd had been looking forward to and had left open on my desk. But they followed me in, trailing paper and markers and crafting devices behind them. Stay out of my room! But those words were not in their language. They continued to erupt, me along with them now, and not in a good way. It even made Scott emerge from below.

It was at that moment I say the happy Ghost of Christmas present shake it's head, wave goodbye and sail out the window.

But we're good, we're happy now. Ate bacon and pancakes and smoothies for dinner. Tomorrow Scott will go to work, actually leave the home and we'll change out of pjs long long before noon. Rosie has a birthday party to go to, her first all on her own, so William and I will enjoy a bit of time to ourselves.
Posted by Sarah at 2:34 PM


Hello, i think that i saw you visited my web site thus i came to “return the favor”.I'm attempting to find things to improve my web site!I suppose its ok to use some of your ideas!! all of craigslist