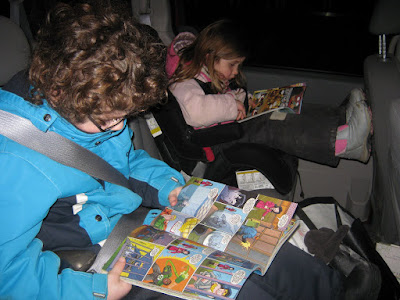 Today started out with Scott running in to the University to give the keynote speech for an undergrad conference. Big man on campus (with horrible back) indeed. It left me and the kids at home, in pjs with coffee, admiring the snow and the way the sun was making it sparkle outside our front window. Scott was home happy and in one piece before lunch but that's when things slowed down and as much as I needed to be out somewhere, the slower my family got and the more comfortable they made themselves with the Wii. So I puttered, and tidied and cleaned and tried to stay happy. And just before I reached my cracking point, the kids had their coats on and we were on our way to one library, followed by the other library and a skating party put on by their school.

Scott is great at it, the kids really want to learn to do it better and I love it, when I can. My balance is an issue as many of you know mostly due to the shaky hands things (this is the point that some of you who didn't know about my shaking (minor minor minor CP) may say ooooh, I though she was just nervous and or cold :) Anyway, needless to say with Scott's bad back right now, if they were going to get to skate, it was up to me. So I said fine, I'll do my best and if we all end up on our behinds together we'll be laughing and Scott can stand at the sidelines taking pictures. Notice there's no pictures of said skating. We didn't have William's skates with us in the bag when we were getting the kids all decked out at the arena. We had an old old pair of Rosie's that no longer fit either one. Scott and I braced ourselves for a meltdown, as the kids stood sort of in shock while watching their friends skate past on the other side of the glass. But they were so great! They wanted more Wii, and doughnuts and other treats we ended up getting at the grocery store on the way home, but they were understanding and didn't need to milk the situation as Scott and I felt horrible and were more than willing to make it up to them. They'd been looking forward to it for a week after all. They were happy enough just with the huge bag of books we'd gotten from the libraries and even once we got home, they sat in the car for almost ten minutes before we could break the spell and get them into the house. And yes, those are child versions of DC superhero graphic novels. It's one of the newest crazes in our house, for both kids.

On another totally unrelated topic. My friend Carrie Snyder has her second book of short stories coming out this spring and you need to buy them! Her first book, Hair Hat was great and I'm really looking forward to The Juliet Stories. If you go over to her blog, http://carrieannesnyder.blogspot.com/2012/01/friday-giveaway-new-quarterly-winter.html she has a giveaway going on this week where you can win the newest issue of The New Quarterly which features one of the chapters from her new book. Look into it!
Posted by Sarah at 5:45 PM