Up, Up and Away

This weekend Rosie went to a birthday party, the first one she's ever been to without her big brother and without there somehow being any connection to me. We'd been to this house once for a playdate and the mother is a volunteer in Rosie's class so I thought she'd be fine, happy, even excited. And she was, until I left. There were never any tears, but there was a phone call from the mother asking me what we should do because Rosie wasn't eating or getting involved in any way. I decided, along with the mother, to let Rosie stick it out for the next hour especially since the Mad Science presentation was coming up.

When we went to pick her up, she was fine (just like Scott told me she would be but, oh, how sometimes I just don't listen). We got there a little early and the kids were in the basement watching the science show. The family's dining table was decorated for the party and showed the aftermath of a festive lunch. We walked around the table to find Rosie's setting, there were name tags at each seat. Each plate had leftover pizza crusts, smears of cake, carrot nubs leftover. Except for Rosie's. There was a clean plate and this cup. It didn't take Benedict Cumberbatch (new Sherlock) to deduct the mood of the youngest person at this party. 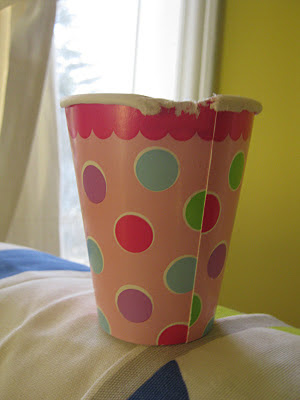 She came up from downstairs happy, the science had been her favourite part. She was glad to see us. She was okay. She got a lovely helium balloon along with her loot bag to bring home. I held the balloon at my feet while Scott drove us home. I watched Rosie yawning while going through her loot bag of cool science stuff. I was thinking that she is the youngest in her class, a November baby, and she does seem so little sometimes. And I'm happy for that. But I wasn't happy, none of us were, five minutes later as we were falling out of the car and had no choice but the stand there and watch the lovely pink balloon drift up into the sky. It wasn't my fault exactly. By the time we lost it, William had held it and then given to me after Rosie was out of her car seat and then I'd made the silly decision to let her hold it. You can imagine the tears. She even named it, Ballooney. 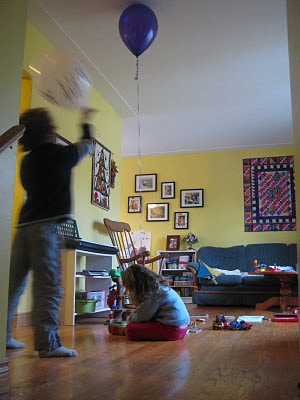 But superdad came to the rescue the next day by surprising us all with a trip to the party store where each kid got to pick out a helium balloon. So that's where it leaves me today. Here on the couch, in a big puddle of sunshine, watching two balloons dance around the living room lead by the air from the furnace and hoping my family has a good day back at it.
Posted by Sarah at 6:55 AM